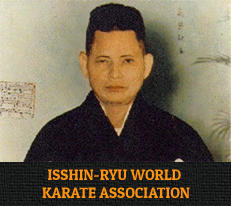 The style of Karate that we study is Isshinryu Karate. Isshinryu is a relatively modern system of Karate, that was brought over to the U.S. after world war W II by the United States Marines who were stationed on Okinawa. The style was created by the late Tatsuo Shimabuku, a respected Master of the Goju-ryu and Shorin-ryu systems of Karate at the time. Isshinryu is a synthesis of both styles that incorporates the best of each system, as well as several of Tatsuo's own innovations. Isshinryu is a very practical, no-nonsense, self-defense, oriented system of Karate.

Isshinryu is a style of karate developed in Okinawa by Master Tatsuo Shimabuku. Shimabuku had studied Gojuryu Karate as well as Shorin-ryu Karate. Taking what he believed to be the most important kata from these systems he developed Isshinryu which literally means "One Heart Way" Isshin-Ryu was formed by taking techniques from two earlier styles of karate: The most notable aspect of the system is the vertical punch with the thumb on top designed to strengthen the wrist and deliver devastating blows.

Highlights of Isshin-Ryu Karate
Isshinryu's main goal is to perfect of oneself through physical and mental development. As students learn they acquire self-confidence, serenity, and humility. Isshinryu has many advantages over other styles such as: :

Isshinryu stresses "close-in" techniques that are more practical on the street vs. high flashy kicks for example.
Isshinryu techniques are mostly thrown from natural stances, limiting wasted motion, maintaining stability and giving you split-second advantages over other styles;

sshinryu uses a "snap style" that permits you to move quickly, deliver more punches or kicks, and lead naturally into other techniques.